Pride events – whether they take the form of celebrations, protests, or marches – are intended to raise the visibility LGBTI people as an oppressed minority. Pride Radar, the inventory of InterPride of almost 1200 prides, is the proof of how vibrant the global pride movement is. Each event, wherever it is held, is a profound political statement.  And it is true, where the LGBTI equality movement has enjoyed substantial success like in North America, Western Europe, Australia and South America the pride movement is gaining strength. 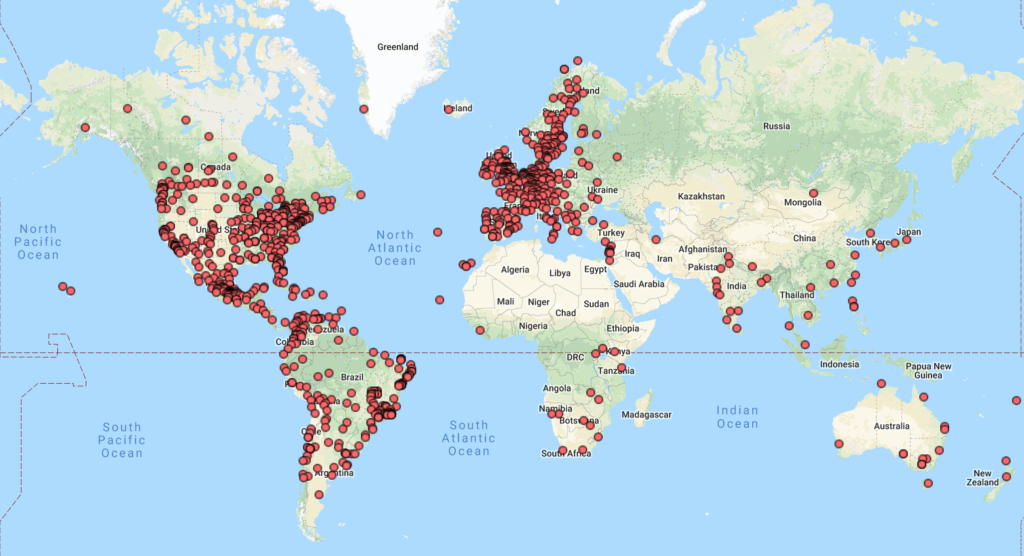 At the same time, we see blanc spots on the world map were prides are absent. In Africa, Asia, Russia and the Middle East with the excluding social climate and laws in place criminalizing homosexuality, it takes more then bravery to organize a pride event. “For the pride movement there is work to do”, Frank van Dalen, chair of the LGBTI-workgroup of Liberal-International and Vice-President of InterPride says.

In recent years Frank and his team from Pride United worked on behalf of InterPride on identifying Prides around the world and exposing mechanisms behind the pride movement. In those years one mechanism became clear, the existence of a pride, the format of a pride and the role of a pride in society is strongly related to the local political, social and legal situation for LGBTI persons.

After the collapse of the Soviet Union many countries in Eastern Europe joined the European Union, adopting equality rights as fundamental European values. And although laws were put in place, organizing a pride event was an uphill battle in many countries in Eastern Europe. In 2010 Belgrade Pride met severe violence and until now the pride in Kyiv Ukraine can only take place with thousands of police-officers protecting the pride. But taking the streets pays off as we have seen in Moldova, Serbia, Bulgaria, Poland, Latvia, Estonia and Lithuania where the climate slowly changes and protesters became more silent and media started to cover without being bias.

“A powerful asset of pride events is its visibility”, van Dalen says. “What is visible can not be ignored and has to be dealt with”. However, this has a dark side as well. In Russia visible homosexuality is perceived to negatively influence the values of the country. Where president Putin needs ongoing support from the province, patriarch of the orthodox church Kirill is happy to provide such. But not without cost and a moral agenda he can focus on. For the LGBTI people in Crimea in Ukraine this meant living in a criminalized environment after the Russian annexation. That many prides in Europe have a strong political agenda is not without reason.

This is at the same time a big difference with prides in the United States. In a survey in which over 100 prides organizers participated in Europe 20 percent of the prides say they have no or minimum impact with their pride events on local LGBTI emancipation, where in the United States this number is 57 percent. One explanation could be that the real battle for same-sex marriage was fought for in the courtrooms.

In Africa the situation is different. In South-Africa, with its LGBTI protecting and equal rights providing constitution, we see an increase of prides within the black community. It is a token of strength and self consciousness of the black power in South Africa but, sadly enough, also a manifestation of the growing gap between black and white, rich and poor. Where the poor black LGBTI people feel excluded from existing prides, they organize their own prides.

Hostility of a society towards LGBTI does not always prevent a pride event from taking place as we saw this year in Kenya’s Kakuma refugee camp, where a small and marginalized community made history by staging what is said to be the world’s first LGBT Pride festival in a refugee camp. Unfortunately, we also experienced backlash in Uganda where in 2016 and 2017 the pride was banned after four successful pride events that took.  It scattered for now the dream of some local activists of walking the streets of Kampala. The multi-day pride event including a pride march in the forest close to the lake of Entebbe were empowering the local movement. With an annual changing organization committee an army of LGBTI activists is trained to change the legal and social climate for LGBTI people in Uganda. Hopefully pride events will take place again in the near future. But Uganda is not the only country where LGBTI activists test the water with their pride events.

In Beirut we saw a pride event in 2017. But unfortunately the pride in 2018 got canceled by the authorities. Local activists are now up for a legal battle to prevent this from happing again in the future. For the Middle-East this is of high importance. Only in Israel prides took place in the Middle-east, but needles to say that this is hardly a token of optimism when other countries in the middle-east are taken into consideration. Beirut as a token of hope for the LGBTI-community providing a space to be visible and be heard is of great importance.

Pride as a tool for change. In Taiwan the then candidate president Tsai Ing-wen and her Democratic Progressive Party (DPP, member of Liberal International) endorsed LGBTI politics heavily and took presence during the pride in Taipei in October 2015. In HongKong the pride movement endorsed the Umbrella movement, that was protesting against China’s domination in the election of HongKongs leadership. At the same time in many Asian countries autocratic governments are active. A pride event in Phuket Thailand focuses on HIV-prevention in support of the own LGBTI community. With a military coup only some years ago and military ruling the country and since then suppressing all events that they consider to be a threat of the happiness-doctrine, the LGBTI community is hard to blame for a non-political pride event. And although China has made a lot of progress on LGBTI-themes, mass-events are not appreciated by the government.

In Cuba we can see the opposite. The daughter of president Raoul Castro, Mariella Castro, being the leader of the Cuban LGBTI community blended the pride message during several pride marches with political messages that are supportive or at least non-confronting with the existing regime. Confronted during world pride in Toronto in 2014 she even defended the lack of free speech (Cubans keep their dirty laundry as proud people inside the country) and the possibility of political prisoners (we have laws in place as any other country, when you break the law you know the consequences). It is a classical story of a president in the making.

Pride events came make a difference. In South and Middle America there is an increase of small pride events backing up the mega-prides in Rio, Sao Paulo and Mexico City. It paves the way for more equal rights like the same-sex marriage in Mexico. What is visible can not be ignored has has to be dealt with. The impact a pride wants to have on society and the LGBTI community is a decision to be made by the organizers of a pride. It is a question what the pride wants to be, a celebration, protest or march. But whatever it is, the number of prides worldwide is growing and that alone will create an ever emerging impact of the world as we know it today.

Prides can not be taken for granted as we have seen in Uganda, Beirut, Mauritius and last few years in Istanbul, nor can LGBTI-people utilize on freedom of speech, freedom of expression or freedom of assembly in every corner of the world. Until then the community will keep taking the streets and march.