0
Micro-targeting in EenVandaag
20 February 2017
Next

Human Rights aspects are perceived to be important during Pride events, following the response of 97% percent of the pride organizers worldwide that filled out a survey sent out by InterPride. At the same time only 31% is satisfied with the impact Human Rights activities have during these events. These numbers show room for improvement when it comes to the impact of pride. Nevertheless just addressing Human Rights in itself will not be enough to have a lasting impact. 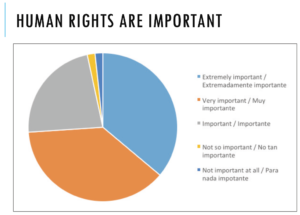 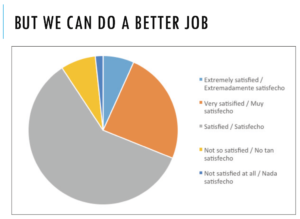 In recent years we have seen many forms of integration of Human Rights in pride. Bigger prides in the west, show solidarity by inviting activists from hostile environments. Others show solidarity by releasing statements or walking with signs in pride parades. These tokens of solidarity are important, but it is questionable how much impact they have on the lives of those who feel pressured by the homophobic climate they live in.

For prides, which want to stay relevant in the eye of the public and the authorities, it is key to be able to show measurable impact of Human Rights programs during pride events. A mere sign of solidarity will not do the trick.

This example shows that impactful emancipatory events during pride require creative thinking, preparation and strategizing. Finding the 5 same-sex couples was not easy and required some convincing arguments. Getting the approval to have the marriages being held during the parade needed lobbying. Involving the mayor with his pro-community  background was necessary to attract additional media-attention while selecting the specific witnesses would strengthen the message. This was all needed to reach the key-objective “supporting the debate in the United States about same-sex marriage”.

The Dutch political scientist, Ronald Holzacker, in 2011 described this kind of strategizing activism within the LGBTQI community as high profile politics. Typical for this kind of activism is that advocacy, media-attention and visibility via mass-events go hand in hand. Pride organizers are better than anyone else within the community capable of bringing large numbers of people to the streets. The support of the participants and spectators for – or better participation of those in – the emancipatory events is key for real impact. The applause during the weddings from hundreds of thousands of people did not go unnoticed. Nevertheless pride organizers can do a better job in collaborating with the LGBTQI-advocacy movement. As good as pride organisers are in organizing events, advocacy organisations know how to lobby for changes of laws. A few years after the marriages the pride organisers of Amsterdam pride allowed LGBTQI youth groups to enter a boat hosted by the Minister of Education, in order to deliver their demand for more safety at schools for the LGBTQI-youth. The message was carefully prepared, delivered and followed-up by the advocacy movement. The Amsterdam Pride organizer made sure that everything would take place during the parade in a timely and safely manner in front of the press, which included television channels.

Creating meaningful and lasting emancipatory events during a pride parade requires work, creative thinking, strategizing and collaboration. Just showing solidarity is not good enough. By defining the three cornerstones of impactful Human Rights projects during pride a lasting difference can be made. Mass-events, media-visibility and advocacy go hand in hand and strengthen each other. For pride organizers this means that they have to seek collaboration with the LGBTQI-advocacy. For the LGBTQI-Advocacy groups it means to pursue better collaboration and understanding of the role and impact prides can have. Turning prides into a mechanism to improve the situation for LGBTQI-people will increase the relevance of pride, strengthen the support for pride amongst our own community, straight allies and authorities and make a meaningful difference in the lives others. Impact in the end is what counts.