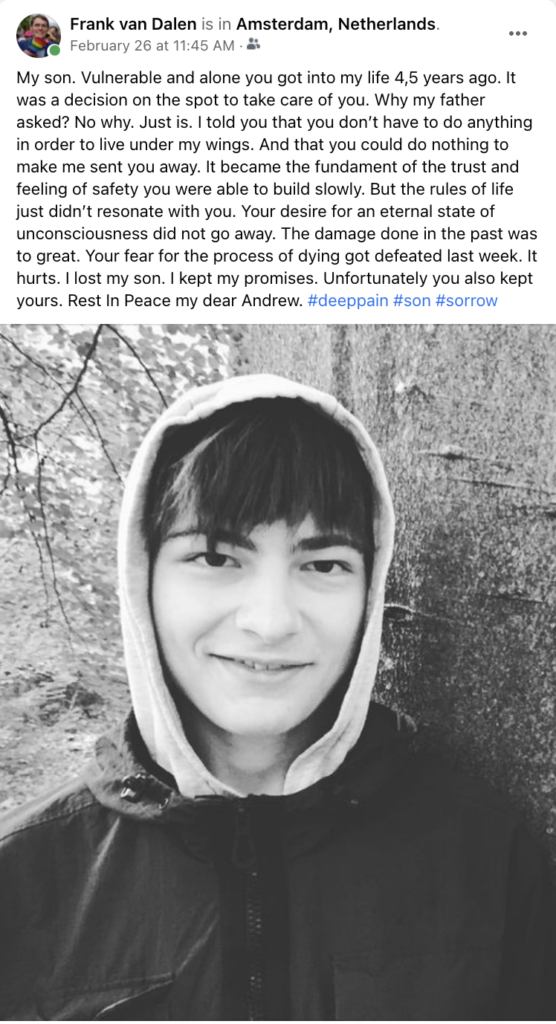 It was 2017. On a site, a photo of a young man caught my eye. He seemed vulnerable. And his profile text betrayed a tough childhood. I wrote to him “Life has not been treating you very well”. Not much later we met at the central station. By the time you were about to leave my house for your airbnb, I asked you who you were in touch with. Your answer cut through my soul. No one. Your phone was empty, no names and no phone numbers. The ultimate loneliness.

I asked you to stay the night. And another night came. At my request, you picked up the few things that fit into one bag. Andrew became part of my life.

Slowly I got to know your background and your short history. It was not a happy one. Poverty, abuse – mental and physical – denial and exploitation. Lack of love and security. It has marked you. And, as it turns out today, caused irreparable damage. You had meticulously prepared your escape from home. Leaving nothing to chance. You ended up in Moscow where you worked in construction for a year and cried yourself to sleep at night. You returned to Ukraine but could not find your feet. After your visas for England and America were rejected, you decided to travel to the Netherlands. The money you had earned through crypto and a bit of naughty behaviour, would be spent on Airbnbs until it would be gone. And then you would get out. With you, death as a solution to the misery you felt was never far away. In fact, you even told me that you considered yourself foolish for not seeing death as a solution much earlier.

Your first months in my life were not always easy. It took a long time to gain your trust. I can still see the utter panic in your eyes and your stiffened body when you accidentally bumped your foot into a vase that broke. I saw it. Your reality was that you would now be dealt with mercilessly, your reality became that someone gave you a hug, said it was just a piece of glass and invited you to clean it up together. And so there were more moments that slowly but surely gave you the confidence that you could be safe with me.

In the beginning, you tried to convey with all your conviction that I could not be safe with you. After all, you were a psychopath, a thief who would rob my house, a manipulator, and liar. It was not what I saw in your eyes. And so I made two commitments:

– You don’t have to do anything to be with me

– There is nothing you can do that will make me send you away again.

These two agreements formed an indispensable foundation for giving you a sense of security. That there is a place where you do not need to be afraid and where you are safe. It took a long time before you began to believe that this was indeed possible. You had never known it.

Wanting to be there for someone unconditionally is not an empty concept to me.

We went out for dinner, we went to museums, we visited places in the Netherlands. You seemed to be alive. I have beautiful photos of you. You were smiling. But the pain remained, so did the longing for death. We had endless conversations about it.

In those conversations I learned how incredibly smart you are. Highly gifted, if you like. You learned English by watching Youtube. When I asked you how your huge vocabulary came about, you said that you had googled the top 2000 most used English words and had learned them by heart. Well, yeah. That’s Andrew. But your cleverness also got in the way. The life questions you had got answers that were not helpful, to say the least. That you are born and then given a broken life with suffering, you found an absurdity. Like buying a broken computer. The fact that life is the goal and not a means did not go down well with you either. You thought that was just the thinking of normies. I dare say I’m not very stupid, but your arguments on the questions of life, you were actually right. But it was completely unhelpful, so we normies protect ourselves from it. It hurts that that was not an option for you.

Social conventions were not for you either. When I came home from a trip, you never asked how it was. Because how is that relevant in your life? Until that one time, when you asked. How was it? I made a dance of joy in my head. That my answer “Cool, did a lot of fun things” was not followed by anything else didn’t matter. That part of the algorithm had apparently not been written yet. I travelled a lot, especially before Corona. I asked you how long I could stay away before it became unpleasant for you. Eleven days, you said. I’ve kept to that all these years. Eleven days, no longer, shorter if possible.

You tried to fill your days. It was not always easy. The first two years you took my boat. At night, because there are no people around. The two times you came into contact with the police, once for an alcohol check and once because the lights were on the wrong side, made you trust the Dutch state more. I thought it was strange. A 19-year-old non-Dutch-speaking kid, with an expensive boat, deep in the night. But it gave you confidence and you sailed away. Until you suddenly stopped. You had seen all the waterways. The project was finished.

Then came the bicycle. You were uncertain in traffic. All that hustle and bustle. You preferred to leave the city. Where the cycle paths are straight and long and the people are absent. The range was limited. After you had ordered the components, you put together your own e-bike. It was your showpiece, with which you pedalled countless kilometres. You know the Amsterdam area better than I do. And again, you had an experience with the police. You were stopped, I was called by the MPs. It scared me senseless. The officer told me that you were chatting happily with her colleagues. In Dutch. You told me later that you thought it would be handy. Long story short, this boy is so vulnerable, we’re not going to do anything about it so I was told. When you came home, you proudly showed me the shield that the policewoman had given you, which she had unscrewed from her cap. A week later, the Municipal Health Service (GGD) checked whether you were doing well and whether help was needed. And another day, two policemen were at your doorstep to check whether you were safe with me. The Netherlands was the only country where you still wanted to be.

You got to know Arjen. He became your only real friend, who you loved to go to. And when Arjen had his work exam, I would ask you: did you wish Arjen luck? Of course not, you said. Arjen is my friend and he knows that I hope he will be successful. That’s Andrew too, rational to the bone. The reception at my sister’s house and her family taught you what a loving family is. You loved being part of it. Together in Friesland, Christmas and last year even Sinterklaas. The first time you went on your own, you called me halfway. You did not want to go. Not because you didn’t want to be with the Poppens family, but because you were afraid to be a burden to them.

Andrew, you are the only person I know and have known in my life who has never been a burden to anybody. You were an asset, a joy to be around, to do things together. It hurts that you were never able to see that. And that goes for so many people, from the neighbours you met in the corridor and with whom you had a chat, or with the Mreijen family in Norg or during Christmas when you played with Casper.

At home, because that’s how it felt to you after a while, we became a well-oiled machine. I did the cooking, you did the dishwashing. I made the mess, you took care of the rubbish. When I went to bed you would come into my room. You would lie on my duvet, I would hold you, give you a cuddle and after 2-3 minutes it was fine. A kiss and you were gone. Unfortunately, all too often into a long night where you couldn’t catch a wink of sleep. The boredom was immense.

My invitations to arrange help were ignored. I didn’t want to admit it, but you had a point. Learning to cope with all the discomforts, what’s the point? Your death wish remained, you just weren’t ready to die. We often talked about it. Lately I knew it wasn’t right. You were calmer, you used your laptop less often and you were in a hurry to do things. Like the skydiving with Rick, just two weeks before your death, which became the highlight of your life. You loved it. The prospect of getting a licence, you were very excited about that. But it made no difference in the end.

Dear Andrew. Last Wednesday night you called me. You were scared, sad and timid. You were afraid to die. We talked for over an hour. You were no longer at home. It was our appointment. I knew what it meant. You didn’t see my last text messages. Had it mattered? Maybe. Or not. I’ll never know.  Thursday morning six o’clock I woke up. I anticipated what would be confirmed to me later on Thursday evening. The hardest period of my life has begun. I have lost my son. Because that is what you had become to me and to those around me: my son. The unconditional love that you feel for your own child was what you released in me. I am eternally grateful to you for that.

Your lack of understanding of social conventions, your original outlook on life, your giftedness and the horrible childhood you had while your brain was developing proved to be a poisonous cocktail. My highest aim was to offer you safety. A place where you did not have to be afraid. Six months ago you suddenly came to me. You thanked me for taking care of you. It was now two dances in my head. We had many conversations. The security I offered you also meant that I respected your choices. Because without that respect for your choices, safety breaks down.

Dear Andrew. You made your choice a long time ago. And last week you were ready for it. You went through the process the way I know you to go through it. Free of drama, well prepared, leaving nothing to chance and respecting those around you or who would find you. You leave behind an immense sadness. And you knew that. But that, you said, is no reason to carry your own suffering into life. And you are right.

Thank you for coming into my life. Thank you for wanting to be my son. You have reached your goal, the state of eternal unconsciousness. Rest in peace my sweet boy. I love you.